Spotlight on Cal Graham – An interview with a Tiger! 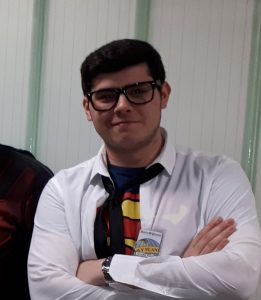 As part of our graduate recruitment program, I thought it would be good to get the first-hand experiences of one of our graduates, Cal Graham who has been with us for 6 and a half years and is now at the tail end of the 4th year of his degree at GCU in Quantity Surveying.

Laura: Hi Cal can you tell me how you came to work with Veitchi Interiors?

Cal: I was working with TIGERS (Training Initiatives Generating Effective Results Scotland) from Sep 2014 – Aug 2015.  At this time, I was working at the royal concert hall with Carillion doing their computer work etc. I decided I would leave TIGERS as It wasn’t for me and began applying for apprenticeships in Joinery etc.

I had spent a lot of time on site helping Ronnie Szczotka, Veitchi’s contracts manager on the job to complete his snagging.  He heard I was looking for another job and asked me to give my C.V. to him which he passed on to Donald Turner. I didn’t think much of it till a few weeks later I was on site and Ronnie told me Donald Turner, a Director of Veitchi Interiors was looking to speak to me. I had an interview set with Veitchi the following Thursday.

I thought I was going for a joiner apprenticeship, but this wasn’t the case as it was for an office assistant basically. This didn’t bother me as it was a job at the end of the day. I went for an interview with Donald and Colin, which went fine and was offered the Job and started the following Monday 3rd August 2015.

Laura: What interested you about the job at Veitchi?

Cal: We spoke at my interview about progression etc. that I may be able to go to college in a few years etc. That was of great interest to me as I really wanted a career.

Laura: What were your initial experiences like working for Veitchi Interiors?

Cal: I started working with Craig Dargavel in estimating which was a great way to get a feel for working in construction from a commercial point of view. Craig taught me a lot and offered great advice back then and still does today especially with any Uni work.

I turned 18 in 2016 and got put on the books as staff and I had pushed Donald to allow me to go to college the coming term rather than wait. This was discussed and agreed due to my commitment to progress.

I decided being a QS was the best path to take as you get the opportunity to visit and work on sites.

I then began Working with Nick Winton doing Metframe take-offs and anything else that needed doing, I even learned how to do wages (Forgot now right enough).

Nick was a great mentor to me as he taught me a lot about construction and life in general especially about maturing as a person, we don’t work much with each other now, but I call if I need him for anything.

I then went out to site and worked with John Haggerty at the Golden Jubilee full time. This was a refurb of hotel rooms. This was good experience of seeing a site from a site managers perspective.

I got asked back to the office to continue working there, then moved to Glespin for a few weeks (ended up 6 months) with Nick, this then lead to working closely with David Smith and Gibby Maxwell at the manufacturing plant where I began completing QA check etc. for the panels along with helping down their too.

Laura: What did you do next?

Cal: Fast forward to Jan 2017 and Nick and myself had moved into the new office at Cambuslang before any other of the Interior’s staff.

I then began working closely with Scott Turner and Douglas Stewart with pricing and surveying Altro projects. At the beginning it was a struggle to learn it all but I eventually got it clear in my head. Douglas was a great mentor regarding sales as he was the dapper guy with the “patter”. I learned a lot from him.

I continued working with Nick, Scott and Douglas for the last few years. Covid hit and we were all off for a period. Douglas retired and so Altro was left to Scott and me. Scott has been a terrific help to me in life and especially surveying, I have learned the fundamentals of surveying from him, and he is always there if I need help with anything.

I am now at Jordanhill working alongside Robert Connell and Craig Hume. This has been great experience to see the ins and outs of day-to-day site management, dealing with the workers and how quick things go on site. Robert and Craig have had a positive impact on me, and I benefit from the stuff they teach me daily, which has provided a more rounded perspective rather than solely money focused. As I am based at Jordanhill I have also been working closely with James Martin by completing his on-site measurements and builders works for his valuations and assisting with sub-timesheets. James alongside Scott have assisted me greatly within my role.

Laura: Have you had good support from senior management?

Cal: I have worked a lot with Donald as a mentor on various projects and tasks, any issues I have had I have went to him for answers which has been great. I have also been working closely with Colin re completing the Veitchi rates for plant, fixings and equipment for the last few years. He is someone who I can go to with any problems I have and help resolve them.

Laura: How difficult has it been balancing study with working full time?

Cal: It has been very tough balancing not just work and study but life in general. You need to be committed to put the work in to make something of yourself. Donald and Colin have been great and have always been good at giving me time to study. So far, I have completed an NC in build environment, an HNC in Quantity Surveying, an SVQ in Quantity Surveying and I am currently in my 4th year at Glasgow Caledonian University doing a degree in Quantity Surveying, so I suppose that proves it can be done!

Laura: What is next for Cal?

Cal: I will be 7 years at Veitchi come Aug this year, I am happy with my progress and the opportunity and will continue to progress to have more achievements and success in my career. I aim to finish my 4th year in May then complete my honours year.